Don't Mine at Night

I Found a Diamond
Mine

Keith Steinbach, (also known as Bebopvox) is a popular Youtuber who mainly does Gaming videos. His most popular videos are Don't Mine at Night, I Found a Diamond, We Found Fun, and Mine. BebopVox's popular series include "Minecraft Monday Show" and "The Vox Of Gaming". He first did videos for in-game weddings on the game Second Life. Afterwards, he would send these videos to the Bride and Groom on DVD.

Although originally living in the US, BebopVox and his wife later moved to Germany, due to his job with the US Air Force. On 22 January 2014, BebopVox joined the British YouTube group called the Yogscast. 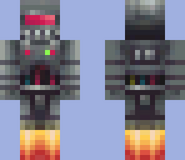 BebopVox's Youtube background.
Add a photo to this gallery
Retrieved from "https://minecraft-music.fandom.com/wiki/Keith_Steinbach_(BebopVox)?oldid=10369"
Community content is available under CC-BY-SA unless otherwise noted.